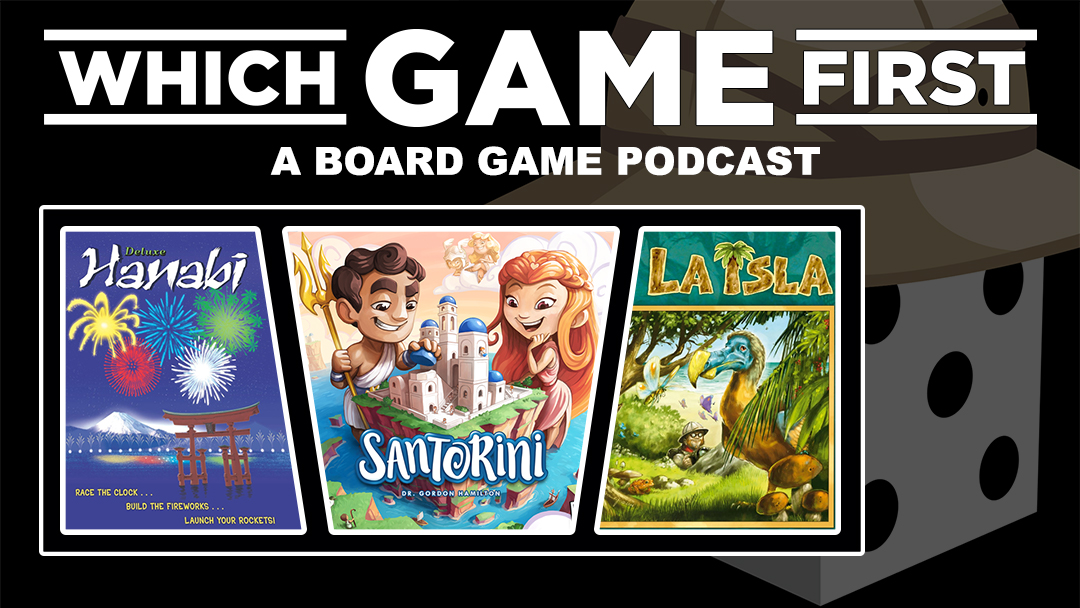 Welcome to Which Game First where we boldly explore the hilariously huge world of board games. Did we unearth any hidden treasures you’ve been missing out on? Let’s find out!

First up this week: We light up the night sky with blazing fireworks in Hanabi
Next up: We light up the shoreline with gleaming Aegean Blue domes in Santorini
And lastly: We alight one tropical shores to record the exotic wildlife in La Isla

Hanabi—named for the Japanese word for “fireworks”—is a cooperative game in which players try to create the perfect fireworks show by placing the cards on the table in the right order.

The card deck consists of five different colors of cards, numbered 1–5 in each color. For each color, the players try to place a row in the correct order from 1–5. It sounds easy, but it’s tricky. In this game you hold your cards so that they’re visible only to other players. To assist other players in playing a card, you must give them hints regarding the numbers or the colors of their cards. Players must act as a team to avoid errors and to finish the fireworks display before they run out of cards.

An extra suit of cards, rainbow colored, is also provided for advanced or variant play.  We played the basic game, but the goal is all the same – strive to get all 25 points available for the most impressive fireworks display in history!

Santorini is an abstract strategy game, situated in a mythological Greek city.  Each turn consists of 2 steps:

1. Move – move one of your builders into a neighboring space. You may move your Builder Pawn on the same level, step-up one level, or step down any number of levels.

2. Build – Then construct a building level adjacent to the builder you moved. When building on top of the third level, place a dome instead, removing that space from play.

Players are imbued with the powers of one of the gods which gives their meeples special abilities, such as building both before and after your move, or switching places with your opponent.

Winning the game – If either of your builders reaches the third level, you win, gaining the favor of the gods forever!

In La Isla, you and the other players each have a team of five scientists, and you want to locate animal species so that you can study them.

On a turn, a player has three cards that they place face-down in the A, B and D spaces on his card display. All players reveal their A cards at the same time, then place them in one of the three slots at the top of their display; the image depicted on the top of this card shows the special power that the owner of this card has available.

After revealing the cards in their B slots simultaneously, the players collect the goods depicted in the lower-left corner of their individual card.

Each player in turn then places one of his scientists on a camp, first paying two resources of the type matching that camp. If the player now has a scientist on each camp surrounding an animal space, she takes that animal tile, scoring points for it as noted on the board (4, 3 or 2 points).

Finally, the card in the D slot increases the value of one animal. You (and only you!) immediately score one point per animal of the type you moved up on the scale. If you don’t have an animal of that type you don’t get any points.

When the sum of these values for all five animals equals seven, nine or eleven (based on the number of players), the game ends at the conclusion of the round. Highest score is the winner, and the finest animal explorer on all of La Isla.