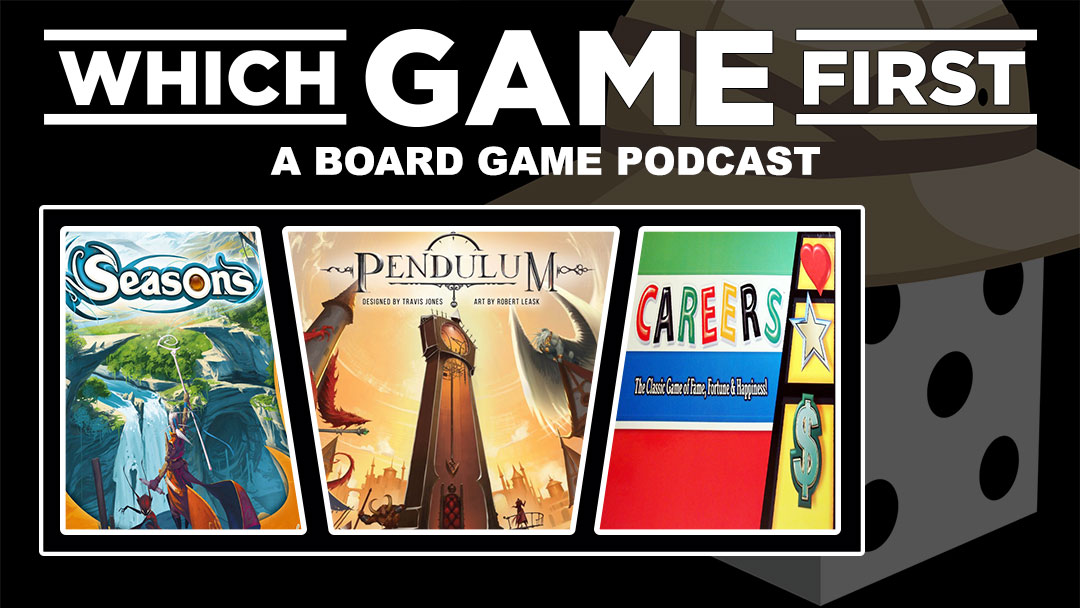 Welcome to Which Game First where we boldly explore the hilariously huge world of board games. Did we unearth any hidden treasures you’ve been missing out on? Let’s find out!

Game designer guests Jade Shames  Jen Igartua, Ben Bronstein, from Pillbox Games stop by for a quick chat about their Kickstarter, it launched on October 6 and runs until November 3, 2020. The name of the game is MUD, a political themed card game.

In Seasons, players are wizards in a tactical game of cards and dice.

In the Prelude phase, players draft their own 9-card deck and then separate them into 3 packs of 3 cards each. Players begin the game with their first pack of cards, then as the game progresses, they will receive the other two packs of cards.

At the beginning of each round a player will roll the seasons dice.

The dice offer a variety of actions to the players:

Each player chooses only one die per turn. At the end of each turn, the unchosen die determines how fast the “time track” moves forward.

The game ends after 3 years of 4 seasons each. Crystals are counted, modifiers are applied, and the highest score is the winner and then they must dance the Seasons Dance in celebration of their victory – the worse the dancing the better!

In Pendulum, each player is a powerful noble vying to succeed the Timeless King as the true ruler of Dünya.

Players command their workers, execute stratagems, and expand the provinces in their domain in real time to gain resources and move up the four victory tracks: power, prestige, popularity, and legendary achievement.

Players must use actual time as a resource in managing their strategy to best their opponents, using time on different action types and balancing it with time spent planning and analyzing.

The winner will be the player who manages and invests their time most effectively and who builds the best engine, not the player who acts the quickest.

Careers is a game where the players set their own life goals. These become their victory conditions. A player may choose to pursue Fame, Happiness, Money, or a combination of all three. The limitation being that the total number of “points” earned in the 3 categories must total 60. eg. 60 Happiness, 0 Fame, 0 Money; 20 of each; or any other combination.

The players endeavor to fulfill their goal by going through any number of different “occupation paths”. All paths have some prerequisite for entry, and benefits accrue from going through any of the paths more than once. The different occupations are designed to be suited to different strategies, eg. Hollywood is good for fame points, while “Going to Sea” is good for happiness. In the end it is the player who gets to their pre-set goal first who will be the winner, and achieve everything they ever wanted in life.